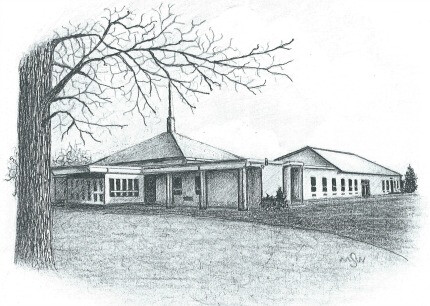 In the fall of 1975, Ronald Gene Riggins, a native of Atlanta, Georgia, who had just finished his training at Lynchburg Baptist College (now known as Liberty University) was seeking the Lord’s direction for a place of service. After an extensive period of prayer and exploration, an invitation was received from a gentleman to come to New Cumberland, Pennsylvania and start a church. After further prayer, the challenge was accepted and he and his wife, Beverly, moved to this area.

By knocking on doors and other advertisements, the first service was announced. Would anyone come? Yes, 21 people came for Sunday School, 42 for the Morning Worship Service and 25 came back for the Evening Service. Thus was born an infant church.

The naming of this new body of believers was influenced by a companion event. The new pastor’s wife was at that very time expecting their first child. As they anticipated this “new life” into their human family, it seemed only appropriate to identify this new church as the other “New Life” occurring. Thus the name “New Life Baptist Church” was chosen.

From the very beginning the Lord provided both people and finances. Within a month the church was able to support its Pastor. On February 8, 1976 the church was officially organized with Dr. Jerry Falwell as its guest speaker. At that time, 51 people became charter members. For four months the church met in the old Fairview Township building until it went up for sale. After a one month stay in the Fairview Township Fire Hall, the church moved to the Hillside Elementary School. From May of 1976 to the summer of 1979, attendance mushroomed at the Hillside Elementary School location. During 1976, the Lord used the church to baptize 61 converts.

On April 3, 1977 the church purchased its strategically located (15 minutes from Rt 30 in York , 10 minutes from downtown Harrisburg and 5 minutes from the I-83 & PA Turnpike interchange) present property of over 11 acres . After completion of a successful bond program, construction of a new building was begun. Completed and ready to use in July 1979, the young congregation moved to its present location.

As attendance and services to people increased, it became apparent that additional space was required to operate the church’s various ministries properly. It was unanimously decided to remodel the auditorium to have an overflow space in what was formerly classroom space. An addition was built and completed in January of 1996 which provided added classrooms and fellowship space.

In 2011, God cast a vision for New Life Church to build a facility that would serve both our church family and the local community. The Ground Breaking Ceremony was held on October 23, 2016 and construction began soon after. The new Family Life Ministry Center would house a full size gymnasium, a large fellowship hall (now called The Gathering Place), a full sized, fully equipped commercial kitchen and eight additional classrooms. Again, as in NLC’s humble beginning, God supplied the resources. This $1.7 million facility was built with only $300,000 being mortgaged.

With great joy and thankfulness our NLC family looks forward to seeing how God uses the FLMC for His glory!